We are here to help!

Why the DSM and not the DTM?

A lot of photogrammetry on the market today contains functionality to perform what is known as "automatic" ground classifications. This type of classification is an algorithmic process that allows the computer to decide whether a point (or area) is part of the ground or not. The computer primarily bases its decision on the Z elevation of a point (or area) by analyzing the surrounding elevation and the points around it. This classification does not include advanced information such as LiDAR pulse returns, color, or other factors.

Users may be tempted to use this automated functionality in their drone to CAD workflow before they import their data into Virtual Surveyor, which means they import a Digital Terrain Model (DTM), instead of a Digital Surface Model (DSM). Users should be aware that using a DTM can cause significant issues with the photogrammetry data and the results they get from Virtual Surveyor.

This article shows a typical scenario, from a customer's example, of what happened when they used a DTM instead of a DSM. We always recommend relying on the DSM when importing data into Virtual Surveyor.

Advantages of using the DSM:

Disadvantages of using the DTM:

In the example below, one of our clients called and said that Virtual Surveyor was changing the elevations by approximately two feet. The client was performing a construction verification survey and had multiple control points on the project. After checking his ground control and the data in his photogrammetry software, there was indeed a definite discrepancy. After a lot of investigation, we discovered that he had the DTM generation option turned on in his software and he had used that file to create his Virtual Surveyor project. After we recreated the project using the correct file (DSM and not the DTM) all the elevations were correctly verified, and our client produced some great-looking CAD drawings. 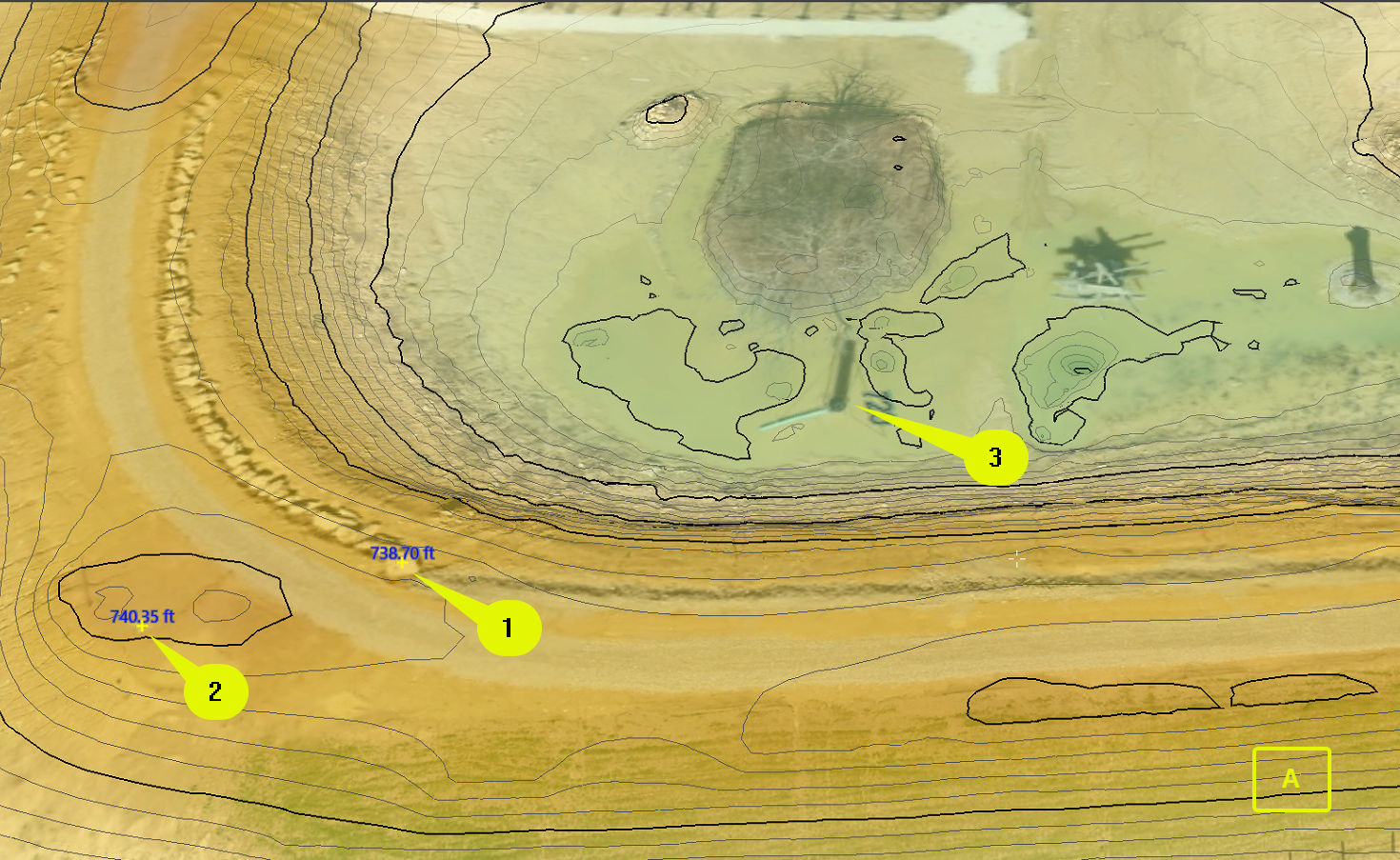 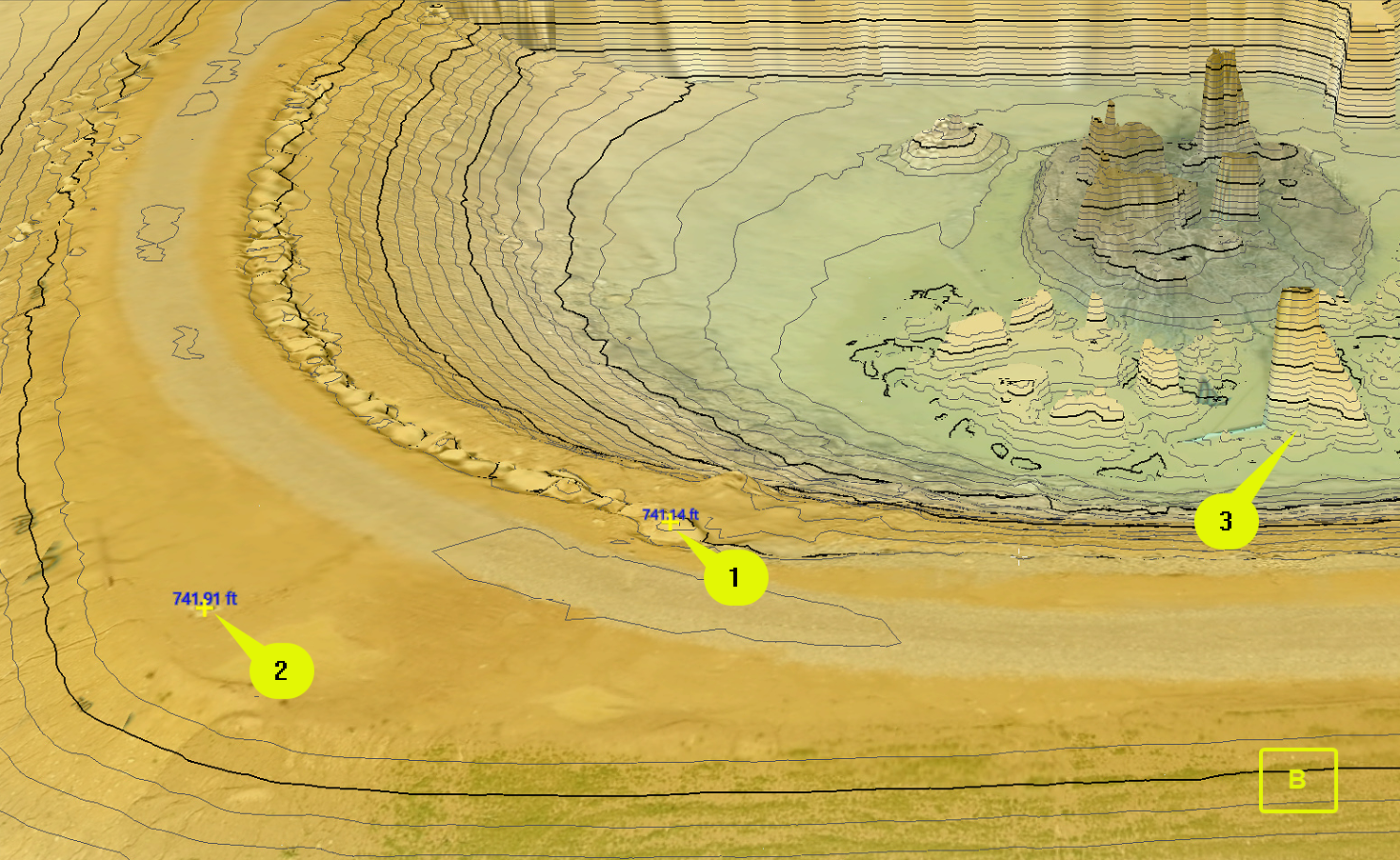 As shown in the table below, you can see the elevation differences between the DSM and the DTM. When comparing both captured screens, notice that there is much more detail in Image B (DSM), especially around the standpipe labeled as location number 3. Image A (DTM) excludes the standpipe and inaccurately creates modeled depressions on the surface that do not actually exist. Close examination of the dam surface reveals that the top was at or near an elevation of 742 ft. The top of the dam in the DTM model varied in elevation from 737.7 ft to 739.4 ft., with a high spot at location number 2, as shown in Image A.

While it is tempting to try and save some time by using the DTM, the above example illustrates the inaccuracy that can happen from using automated solutions that you have no control over. It is fortunate, for this use case, that the user double-checked his data before proceeding forward with additional work. It is better to have a 100% data set that you have full confidence in, rather than wondering and having to reprocess multiple times. As a land surveyor, I want to decide what I keep for my DTM. Using the full DSM, along with Virtual Surveyor, provides me with total control of what I need in my topographic survey.

Did you find it helpful? Yes No

Send feedback
Sorry we couldn't be helpful. Help us improve this article with your feedback.